Six-inch hardened SS scale (manual) with SPC
output & M3-0.5 threads. Trimmed some of the scale off the top off using a cutoff wheel, followed by a
carbide end mill & then diamond wheel grinding. Radiused the two top corners as they
are close to the ON/OFF switch. 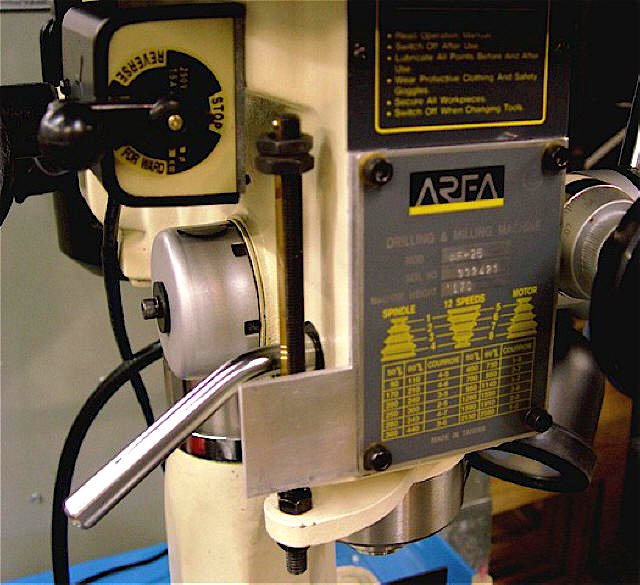 Z-axis, 1/8" thick, scale-mounting plate.
The four mounting hole locations were accurately determined using 1/4-20 transfer screws.
This bracket configuration allowed me to retain use of the speed-settings plate. An earlier
version used a 1/16" plate, but was too thin.  Scale 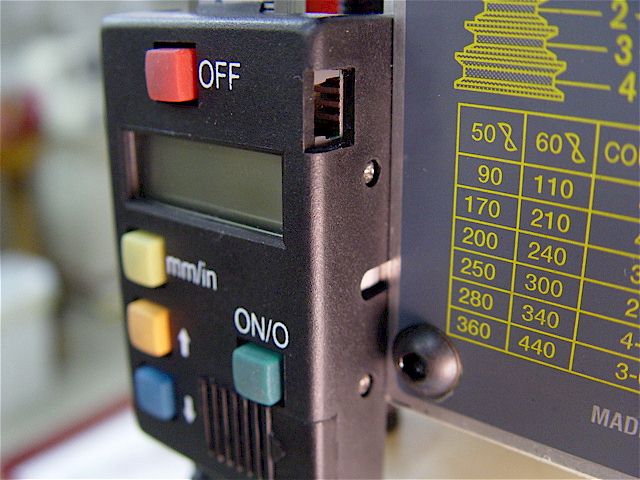 This vertical-style scale has a good SPC plug receptacle.
This type scale was used for the 9x20 lathe scales.  Not as easy to solder on wires, though, if that is the
route one is taking. All cable plugs are held in place with a spot of hot glue. Soldered a 100-mF10v tantalum
capacitor across the battery leads of the scale. 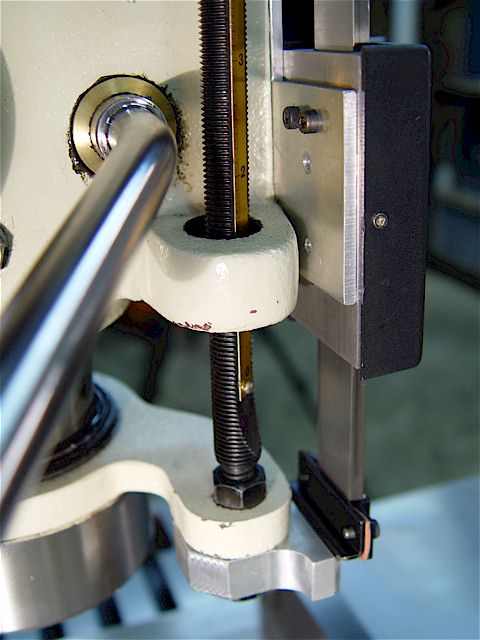 The mill's depth-stop function is retained. 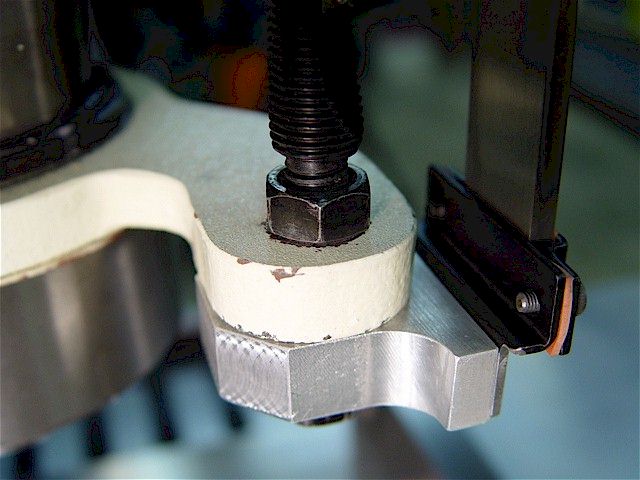 Detail of the two, lower brackets. 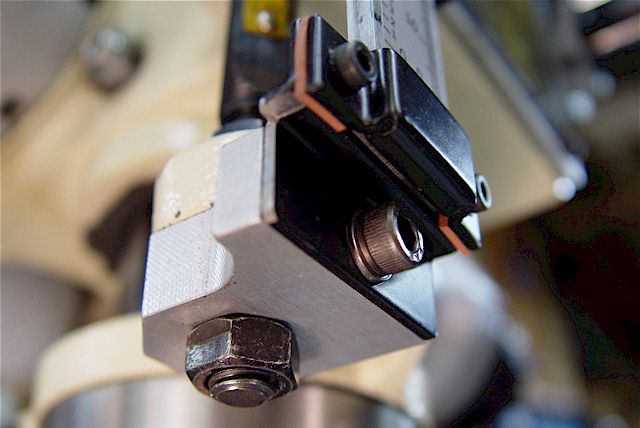 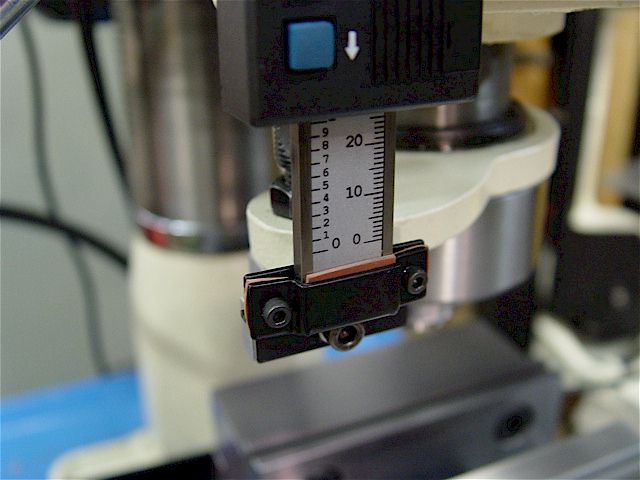 Installed rubber washers on all scale
mounts to allow floating which
reduces strain on the transducers. The RF-25 mill's free-floating Z-axis design works
so well that now all of my mill & lathe scales are attached at only one end while the other end
remains captured but loosened to allow floating. This approach greatly reduces minor out of
alignment induced stress on the transducer. This design also helps to reduce DRO jitter as does a clean,
deburred transducer with NR capacitors. 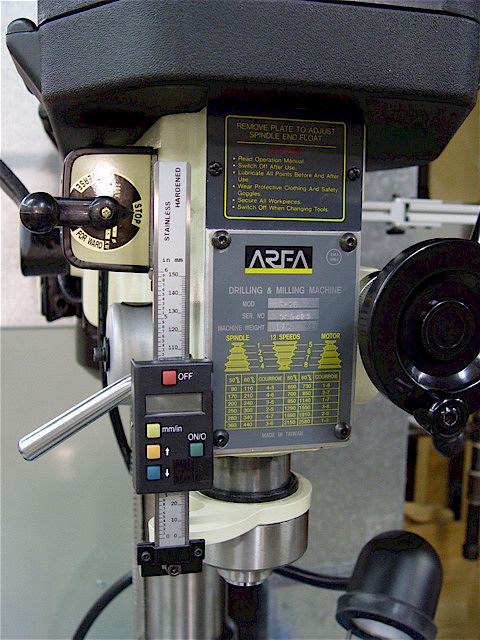 Radiused the top scale corners by grinding with a diamond
wheel. The scale top end is free floating. Also, the  zero of the printed in/mm scale is aligned with the bottom
edge of the transducer when the quill is fully retracted. This scale is not a modified digital caliper but a purpose-built vertical scale. A similar installation was used on the floor drill press Z-axis DRO. 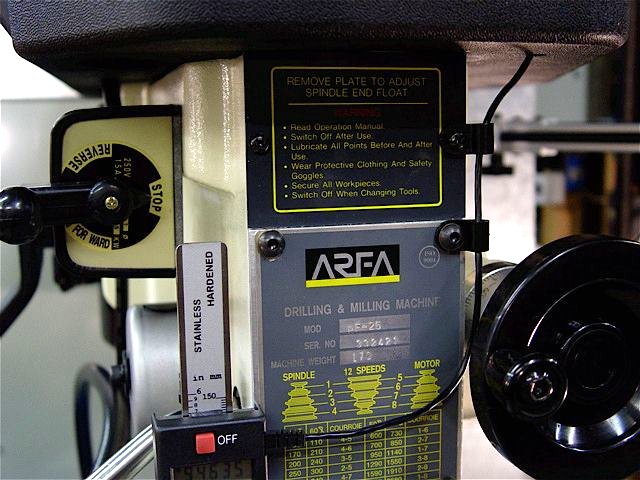 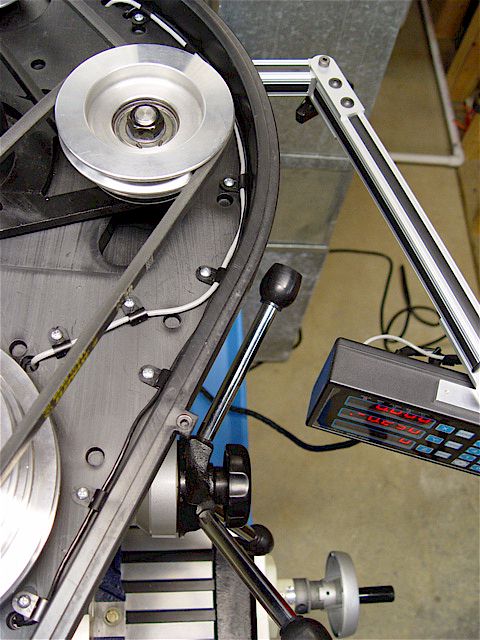 The black cable is for the Z-axis scale &
the gray cable is for the tachometer. The cables are fastened down about every
three-inches along inside right side corner of the belt housing, then exits behind the DRO's arm mount. The flat sides
of all but two cable tie-downs, are set against the housing inside corner so as to not turn under extended
vibration. The arm's base is a triangular bracket that is mounted under two of the motor hold-down bolts.
The arm is made out of 1010 (1" x 1")  80/20 extruded aluminum. I ran the cables
inside the arm's back-side channel & then snapped in black plastic 80/20 inserts. In retrospect, 1515
(1-1/2" x 1-1/2") extrusions would have been a little stiffer.  I like to use a Unibit to make accurate, clean holes
in thin materials. I have since removed the quill levers. 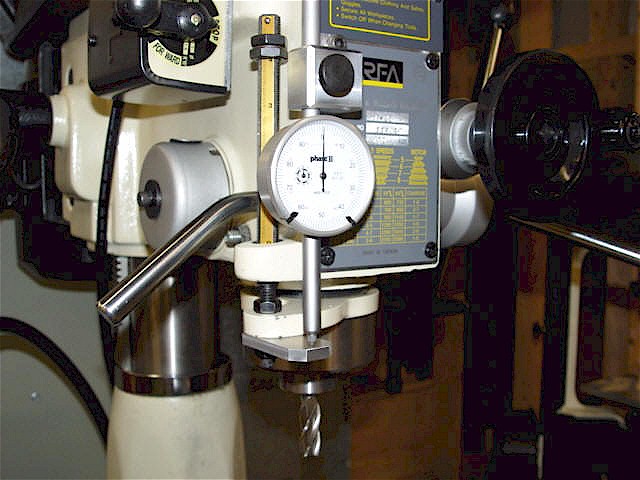