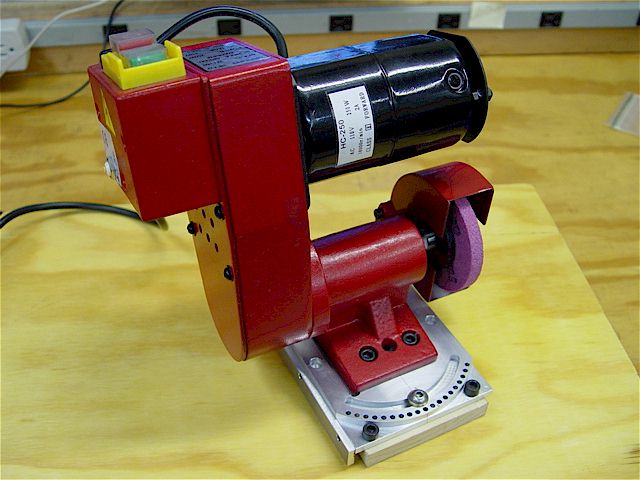 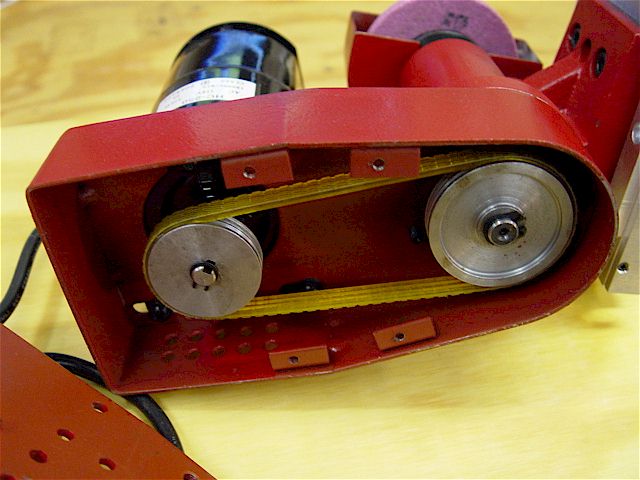 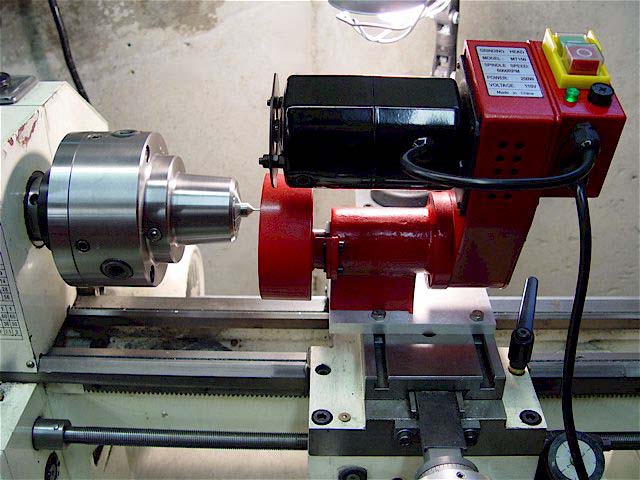 A simple grinder to cross slide adapter plate is held
down using the same four, M6-1 bolts & nuts used for the QCTP clamping plate. A 0.426"" plate
placed the grinding wheel center at the 9x20's spindle centerline. The motor & belt housing are tilted
back toward the operator to allow a better view. 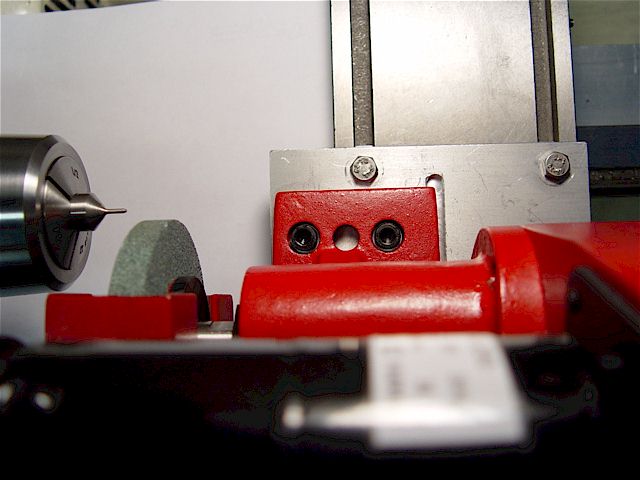 Top view of the simple adapter plate. A slot was milled
that allows the ledge of the grinder's foot to align against. The slot's top left edge was chamfered to allow a tight fit.
The foot was deburred & wire brushed to remove paint overspray. Two, M6-1 cap-head bolts with washers
are screwed into threaded holes to hold it in place. Always wear eye protection 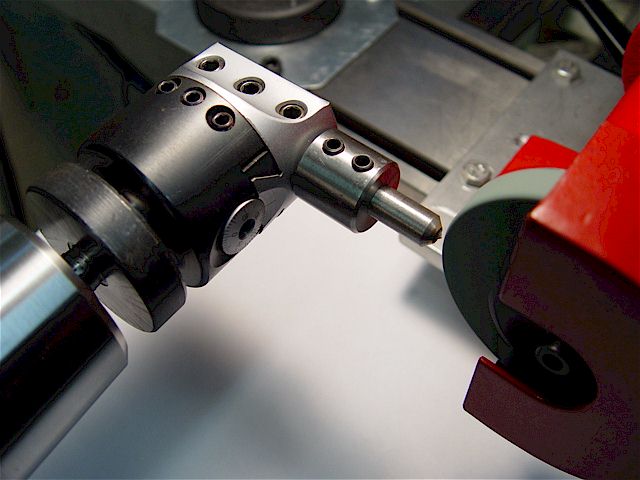 Mounted a single-point, 0.75 carat diamond dresser into
the spindle using a 2" boring head with a 1/2" shank arbor. The spindle is in lowest speed & engaged to firmly
hold it in place. DO NOT turn the lathe on. I had made a 1/2" to 3/8"
boring-bar adapter for the boring head which also holds the dresser shank. I advance the wheel into the dresser about 0.0005"/pass.
Always dress the wheel before use. 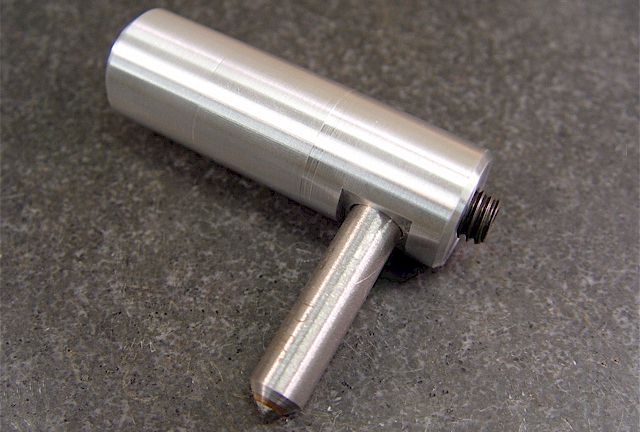 A dedicated diamond dresser fixture. The 7/8" diameter holder has a 3/8"
precision-reamed blind hole for the dresser. 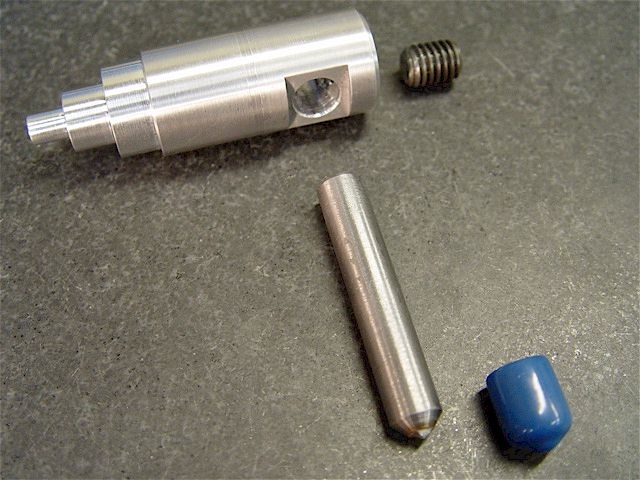 Improved the dresser fixture by reaming the 3/8" hole
for the dresser all the way through for more adjustability. The  holder now has 1/4", 1/2", 3/4", & 7/8" steps
for added flexibility when mounting in a collet. 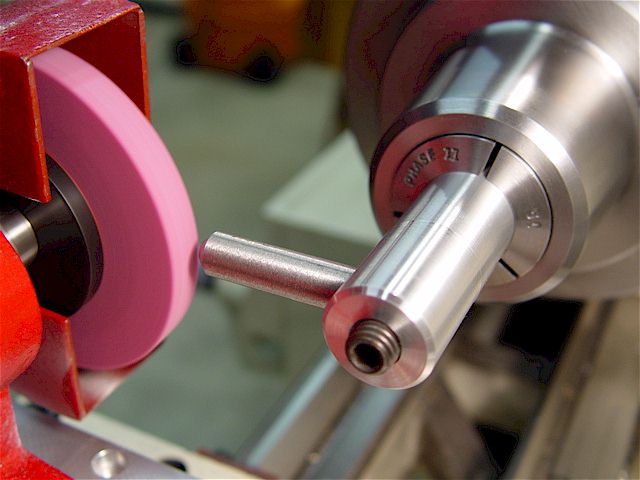 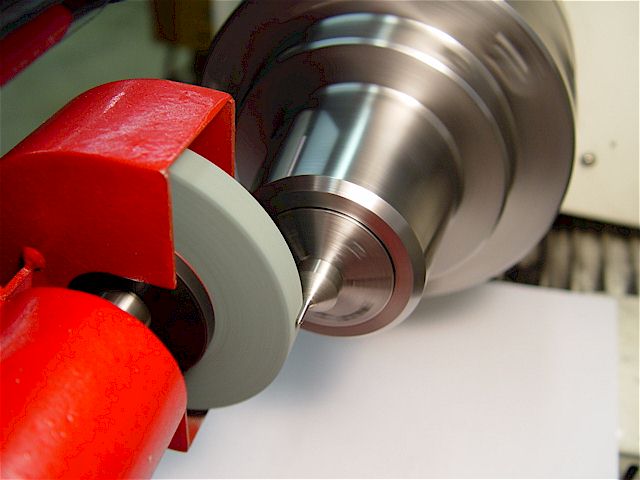 It puts a nice finish on steel.
The 80 grit wheel is shown, above. Reshaping a removable/replaceable tip for a
General No. 79 automatic center punch, below. 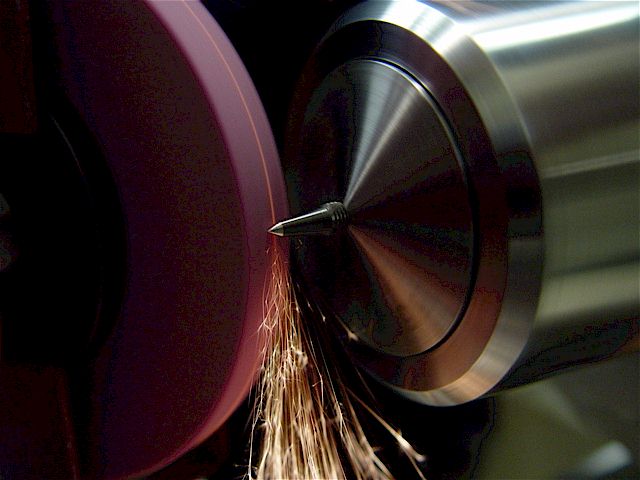 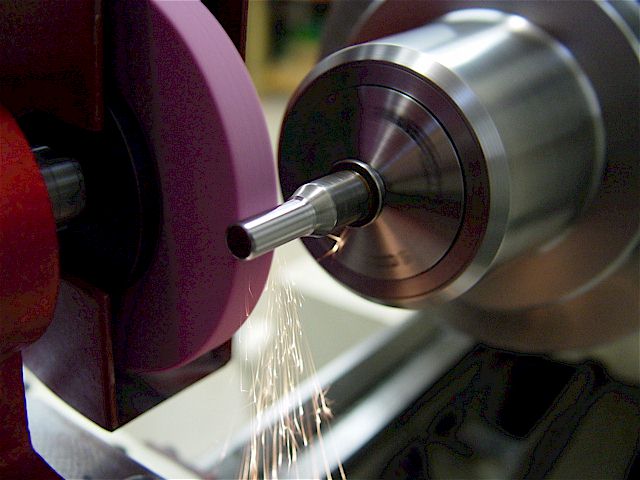 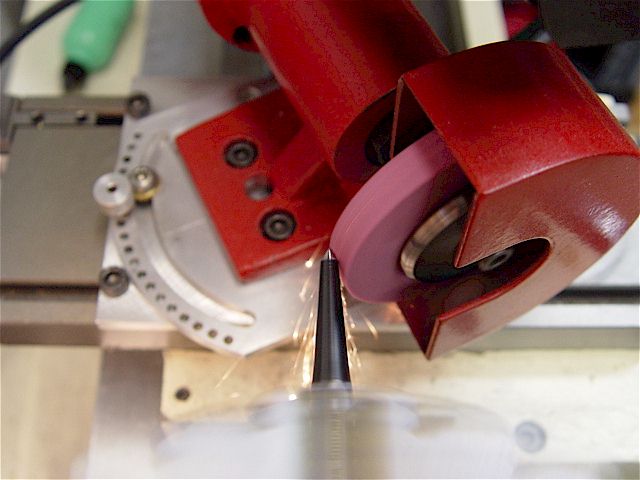 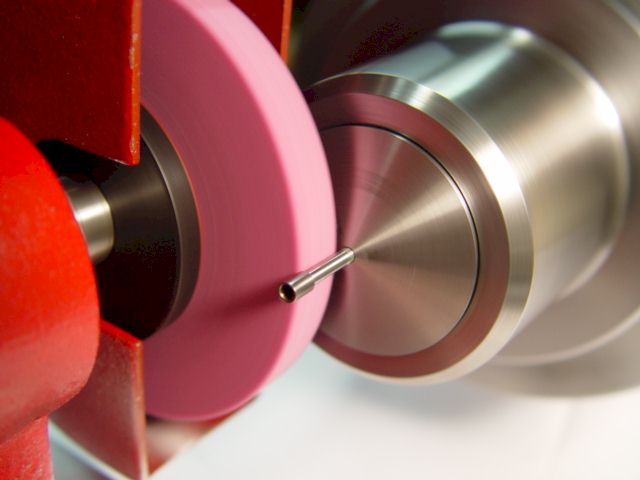 Removing a burr from an interchangeable counterbore pilot. 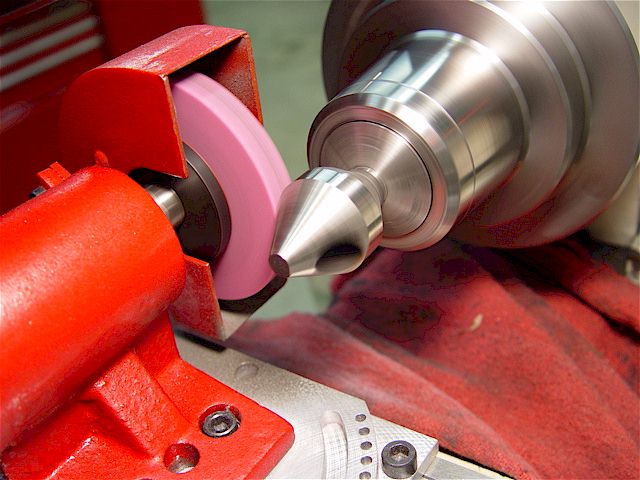 Cleaning-up the body of an imported countersink.
Both the lathe & grinding wheel should turn CW so the surfaces are moving opposite each other. This method
produces the best finish. Tool post grinder movie. In this movie the part appears to be turning the wrong
direction but this is due to the camera's 30 fps sampling rate. This is called the wagon-wheel effect which is caused
by under-sampled (stroboscopic) apparent motion. 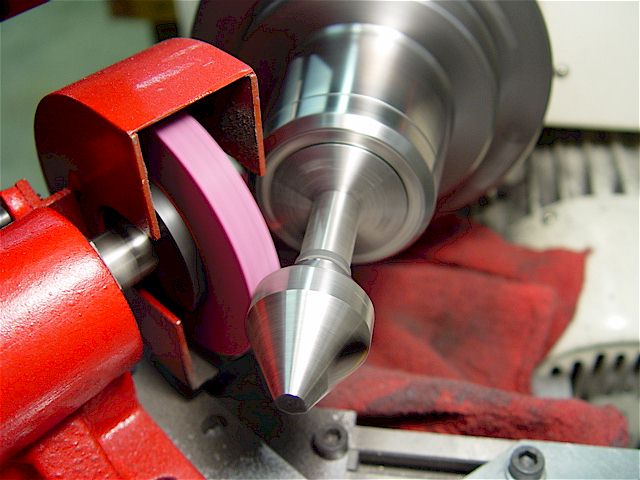 Grinding at a 35 deg angle as set by the pivoting bracket. 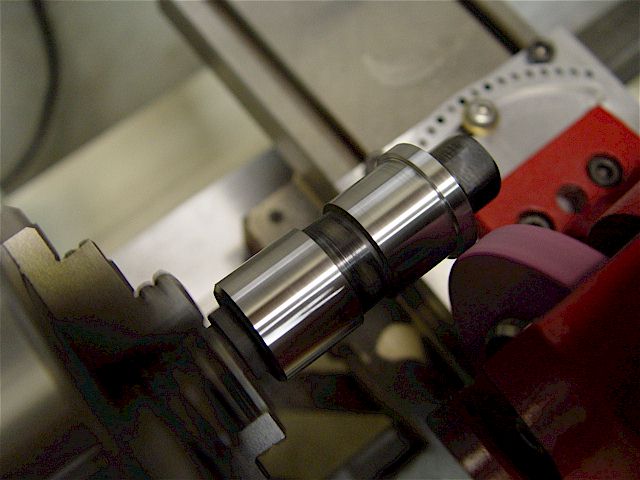 The collet stop body did not fit inside all of the 5C
collets so it was reduced using the tool post grinder. 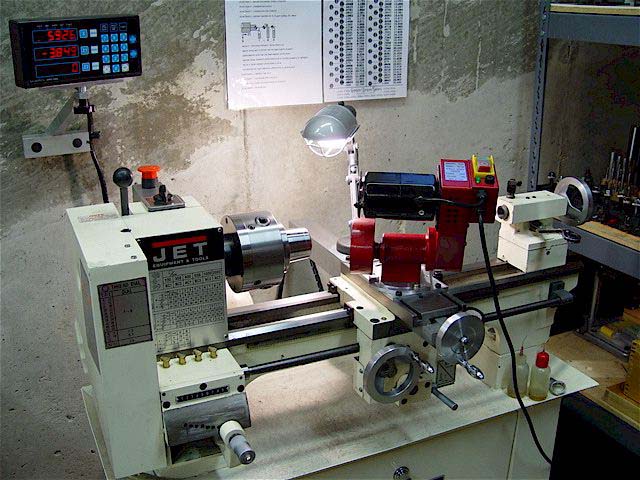 During grinding, abrasive dust is produced;
protect the ways with a cloth. Pivoting Bracket 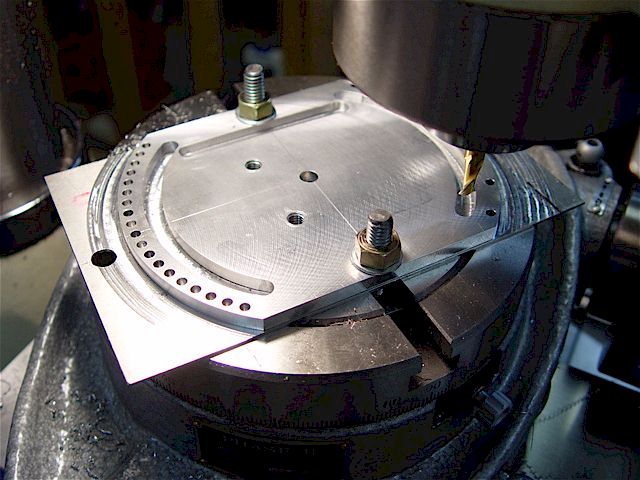 In order to accurately rotate the grinder to different
angles, I made a pivoting bracket (see drawing). Top bracket was bolted down onto the rotary
table with a scrap plate on the bottom to keep from autographing the surface. Indexing holes every
5 deg on the left & 15 deg on the right. First, center the rotary table then indicate the plate off
the precision reamed, 1/4" hole in the center. 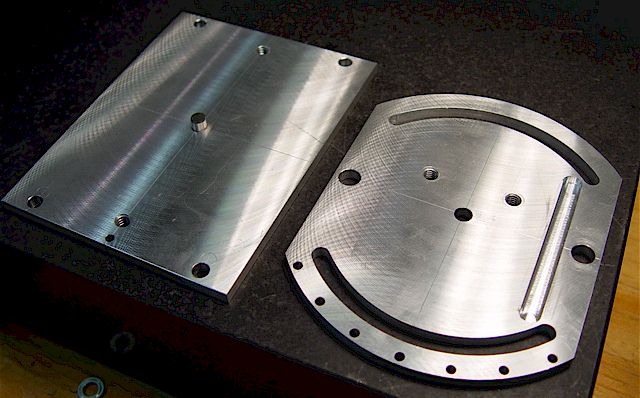 Base & top mounting plates to allow rotating the grinder.
Pivots on a 1/4" dowel pin. 1/8" reamed holes every 15 deg. Each plate was fly-cut to 0.213" so when combined, it would
align the grinder wheel's center with the lathe's center. The two larger holes on the top (right) plate were used to
clamp it to the 6" rotary table. The slots are a 1/4" wide. 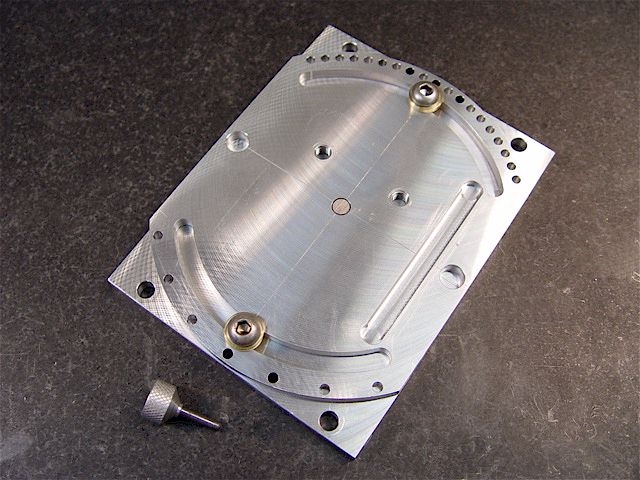 Added indexing holes every 5 deg along second edge.
Detail of dowel pin with knurled knob, shown. Note relief at both pocket ends. The base has 6.5mm
clearance holes for the 6mm tie-down bolts. 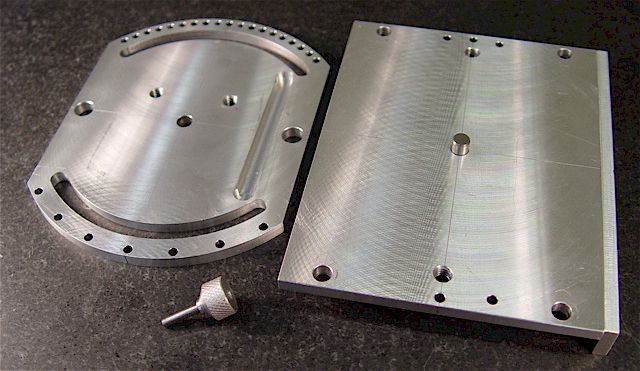 Added an alignment bracket on the base (right) that
is placed against the lathe's cross-slide table edge. Three, 3-48 Phillips flat-head screws are used to attach
the bracket. This bracket is 0.005" below the base's top surface to allow rotation of the upper plate. Returning
the bracket to the same rotational position reduces the amount of material that is removed while wheel
dressing. Note the secondary zero-indexing holes. 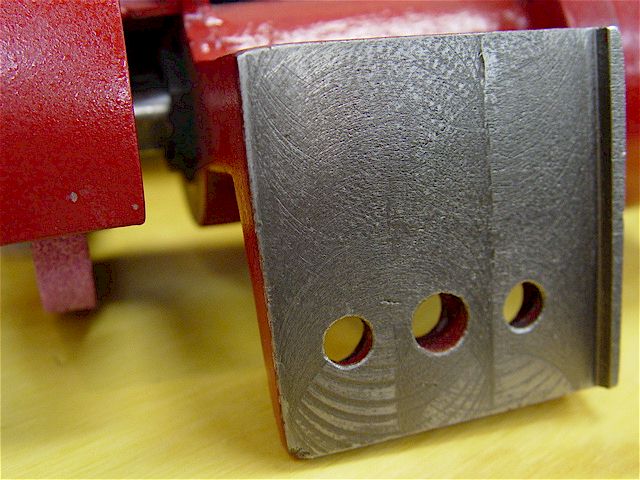 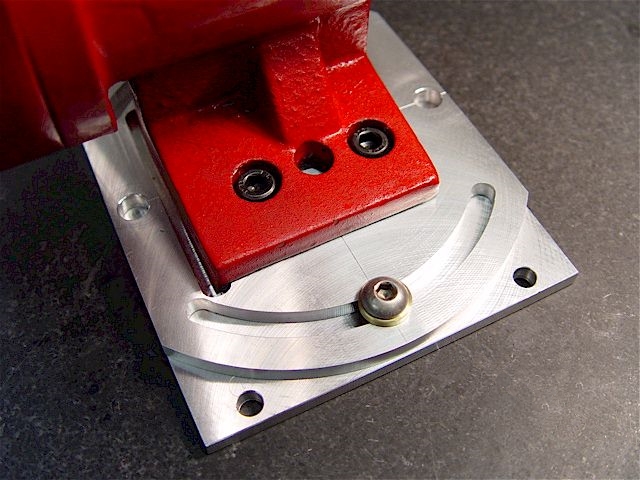 Pocket for the foot's alignment edge was milled
the same as that for the simple bracket. A pocket is stronger than if cut all the way
through. Both ends of the pocket were relieved (milled) with small right-angle cuts so
they would not touch the foot's corners. 1/4-20 button-head bolts with custom-sized brass washers
are used to clamp the upper rotating plate to its base. 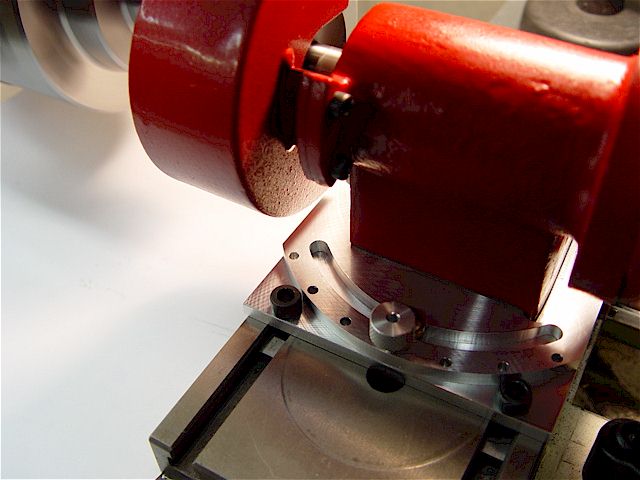 An aluminum knurled knob with a 1/8" dowel pin
insert is used to align the plate indexing holes. The base uses 4, M6-1 cap-head tie-down bolts. 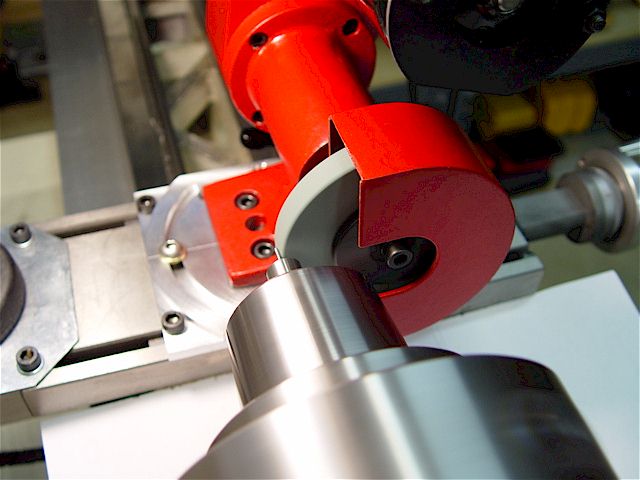 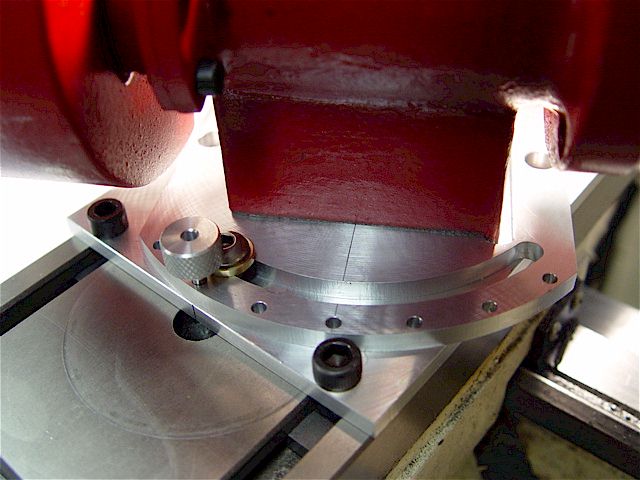 Grinder is shown set to & used at 30 deg
to grind a 60 deg included angle point. 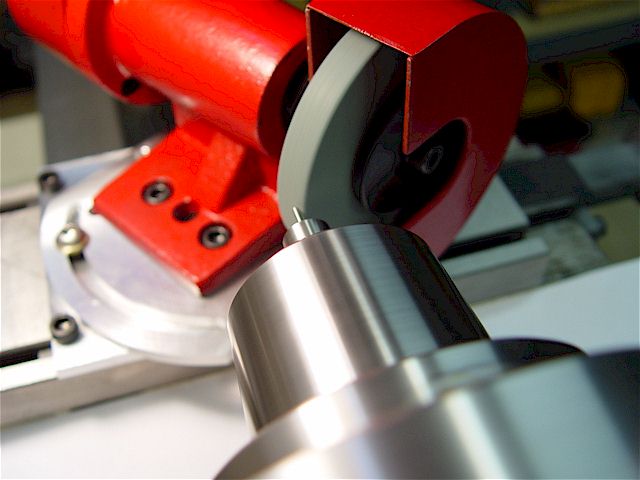 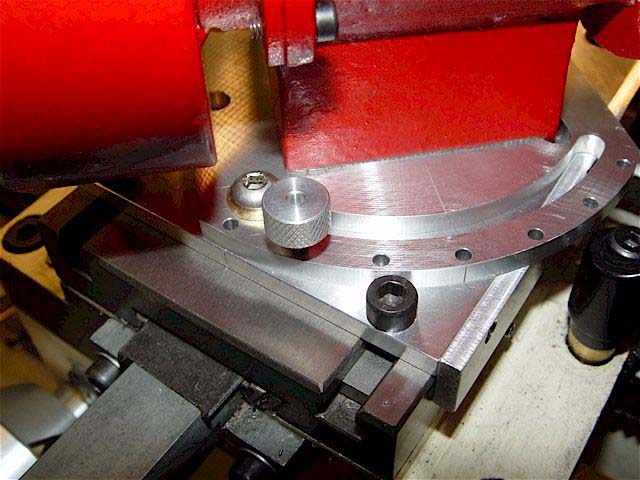 The guard interfered with the indexing pin at 45 deg so
a secondary zero position was made 15 deg to the right. Note how the base alignment bracket on the right
side is up against the side of the cross slide table. Air Micro Die Grinder 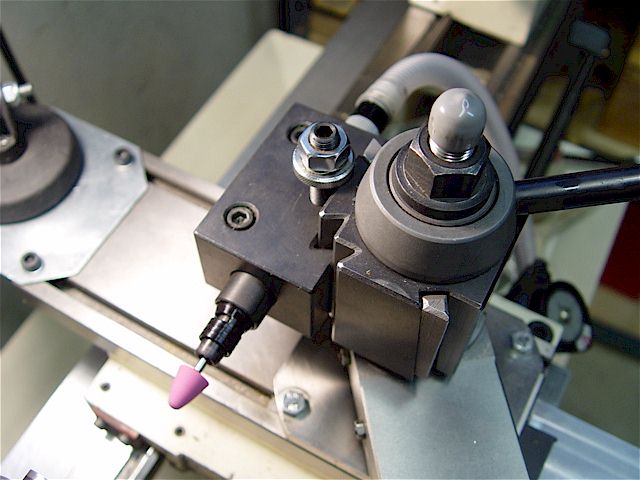 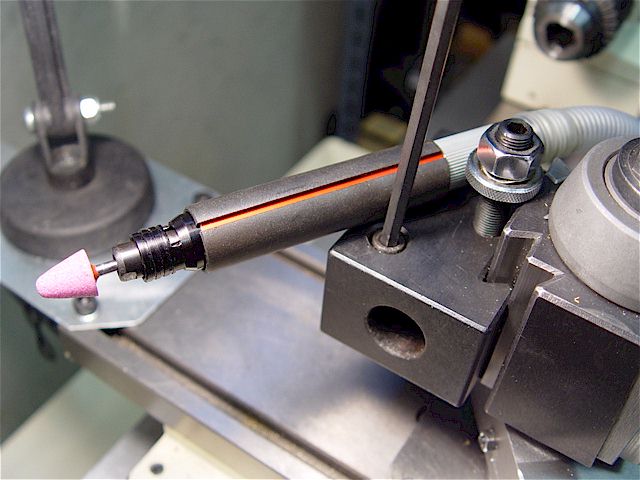 Precision holes are either
reamed, bored or precision ground.